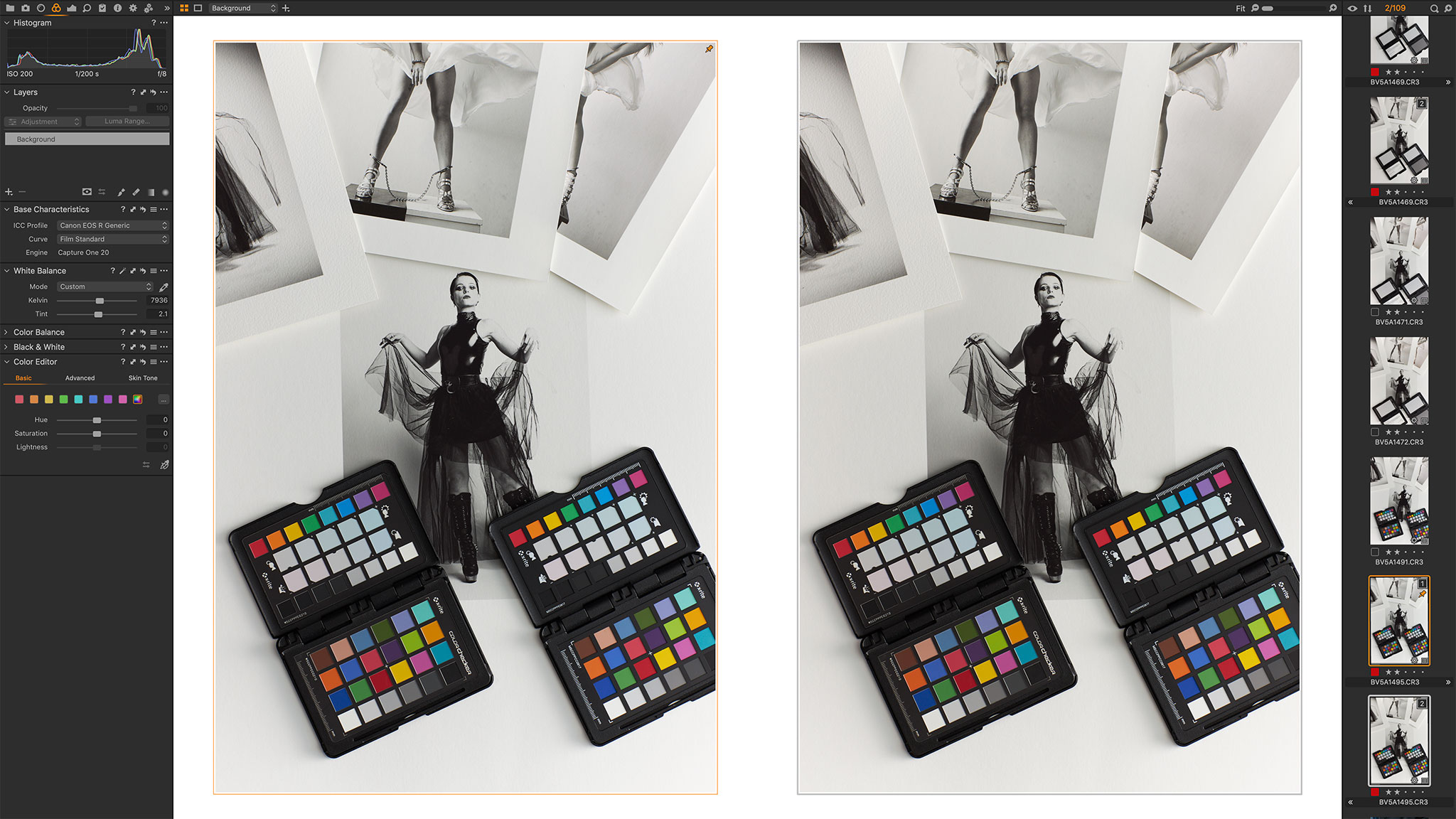 If you’ve not downloaded your free copy of the comprehensive guide to fine art printing with Lightroom, get it now!

I’ve got a brand new X-Rite Color Checker Passport. The new version has acquired some additional features such as the ability to generate ICC camera profiles for Capture One, in addition to ACR camera profiles. It’s also got some nice features for highlight, midtown, and shadow calibration using scopes in video editors. Those things are great and certainly worthwhile, but new features were not the real question I wanted answered when asking myself about when it might be time to get a new color checker. Instead I was more curious as to how far “off” an old color checker might be due entirely to its age.

It just so happens that I have a color checker passport that’s about a decade old. Through pure luck it’s also in pristine condition. For most of its life that particular color checker has seen almost no use. It has only seen use a handful of times and it’s never been left open lying around. I happen to have quite a few color charts and this particular one happened to be a sort of backup that languished in the pocket of a travel camera bag. If your color checker sees a lot more use, dirty environments, is exposed a lot more than mine has been, or is touched a lot, it’s probably going to show very different results than this little experiment.

I don’t find myself making pictures in a lab — ever - so this particular test is simple, strait forward, with reasonable precautions to make sure the results aren’t completely compromised with a lot of variables such as a light source that’s really warm, super cool, or extremely narrow in it’s color. Those things can be tricky and may exaggerate tiny things that have nothing to do with any difference in color of the color checker. I’ve also made sure there are no extreme reflected colors from the environment or other light sources that could be localized in the frame.

I used a neutral subject in most of the frame because it’s easier to see color differences in neutrals than it is on more saturated subject matter. Take a look for yourself. You probably see that there are two distinctly different color balances between the two versions in the ”whites” but it’s hard to tell if you are looking specifically at that color patch on each passport.

Moving on to the colored patches used to generate camera profiles for Adobe Camera RAW or Capture One I see similar but not identical results. The old passport is giving me an average white balance temperature of 7683 with a tint of 1.8. The new one gives a temperature of 7936 and a tint of 2.1.

Again the new one is measuring the light as warmer than the old passport meaning the patches are cooler. This is the direction that I would expect the neutral patches to change to as they age — typically more yellow/orange. You see this with everything from paper to light modifiers like reflectors, soft boxes, etc. They tend to get warmer as they age. Why are the neutral patches a bit different between the two different surfaces of each passport? That answer could involve a thousand different variables, one of which is the shot-to-shot differences in color of the light output. Remember I’m not in a lab; the A1 is not as consistent as say the Profoto Pro-10.

Note: The absolute numbers here aren’t that important. They will be different for different cameras, different light sources, different bounce surfaces, etc. What is important is a consistent direction of difference between the two color checker Passports. Also note that the difference of 200 points or so of temperature is not a consistent absolute amount. 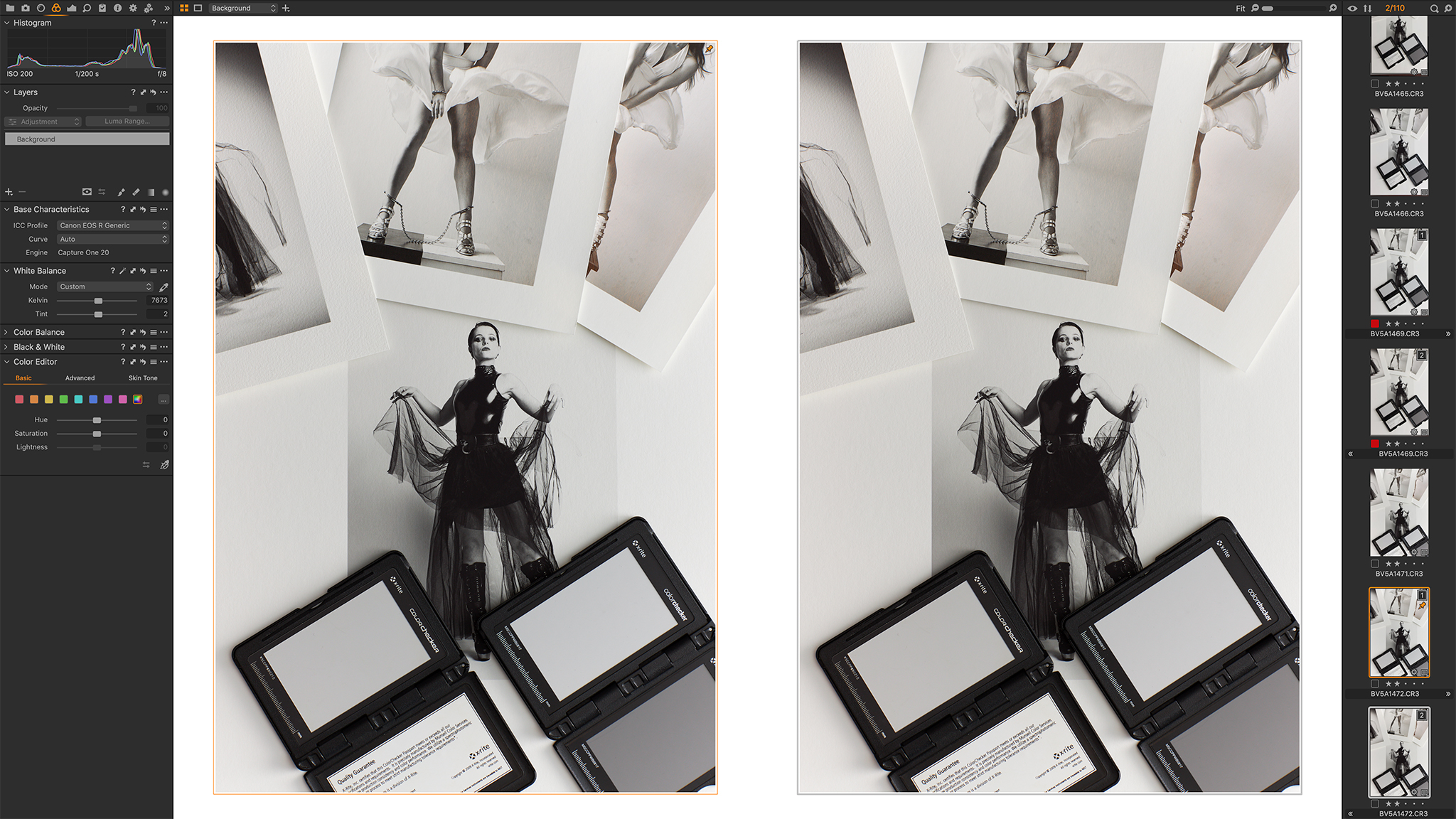 Is two or three percent a big deal? As with most things the answer is — it depends. In many real world circumstances there are so many things that affect the color balance of a scene and even color balances within that scene that are far more than two or three percent. A mixed light source, a reflection off of a colored surface, minor color temperature differences between two different strobes or power levels of the same strobe. All of these things are way more than 2-3% of many real world scenarios. Here’s an example of the same setup with the overhead lights turned on.

Notice anything strange about the print in the upper right corner of the frame? Look a little closer and you can even see some of that color cast on the print to the left of it. Realize that I am shooting at ISO 200 f8 1/200s. Those lights don’t even register as an overall exposure without the flash; the frame is essentially black (which I tested). What’s going on here? Much of the frame looks similar to the screenshots above. The smaller prints at the top are glossy. The one in the upper right corner happens to be at just the right angle to reflect that light source directly. The one in the middle is partially reflecting it.

The point is that 2-3% is not a deal killer in terms of many real world scenes from a white balance point of view. The real world rarely sees neutrals that are absolutely neutral. Whites are not pure white. Two different whites don’t match exactly, on and on. For non-critical applications 2-3% difference is the least of things one needs to worry about.

On the other hand, if you care about color accuracy enough to carry a color checker and especially if you are creating camera profiles to get the best results possible, why would you ever want a color checker that’s off 2-3% and probably farther off when it comes to the color chips used to make custom camera profiles? This matters a lot more when you’re in a more controlled situation where results matter a lot, like for print and commercial work. It may also matter a lot more when you are shooting video and have far less headroom in terms of correcting and grading color.